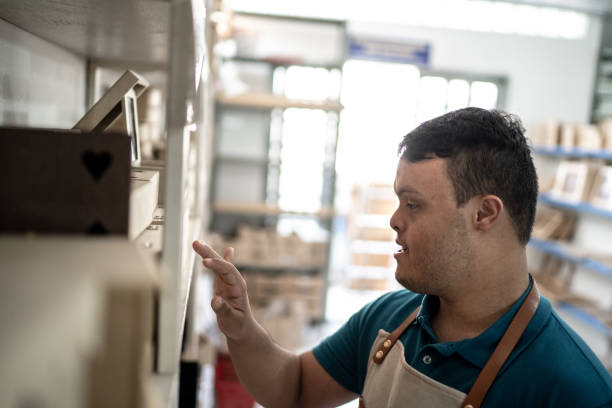 People with disabilities often have little opportunity to find work. One idea on how to change this is from a local Polish association “Siedlisko”, which with the support of experts from the Educational Research Institute (IBE), and based on its own experience in the field of occupational activation of people with disabilities, has created five qualifications with intellectually disabled people in mind.

The challenge to change the labour market was taken up by the Association for Assistance to People with Disabilities "Siedlisko". Founded in 2006 at the initiative of teachers and parents in Staniszcze Wielkie (Opole Voivodeship), the organization’s goal is: “to undertake such activities on behalf of people with intellectual disabilities that give their lives personal and social meaning”. And one of the main activities that gives human life meaning is work. In the course of offering assistance to its clients, Siedlisko discovered the Integrated Qualifications System.

The mission of the IQS is to enable people to find their place in the modern labour market by making it easier to retrain or by validating newly acquired qualifications. This is the purpose served by the qualifications register − part of the IQS. The detailed descriptions of the qualifications contained in the register describe the knowledge and skills a person must have in order to validate their competence in a particular field. Reading the same descriptions, employers can find out what they can expect from employees with a certificate confirming a particular qualification.

The qualifications system introduced in Poland is similar to those implemented by all European Union countries. The Siedlisko Association, however, has made a significant difference by applying to have qualifications included in the IQS that are specifically targeted to people with intellectual disabilities. “We wondered whether to help this group with the descriptions of these qualifications, and with this question we went to Siedlisko. We wanted to understand the need and, at the same time, the reason why they should be included in the system,” explains Jerzy Furman, principal analyst for research and development at the Educational Research Institute (IBE). “We found a really great working environment in the nursing home where people with intellectual disabilities make up 50-60 percent of the staff. They help the elderly with the simple activities of daily living, such as making the bed, washing, and having meals. Siedlisko's second business activity is catering – they prepare up to 400 meals a day. The meals are delivered to local businesses, schools and private customers. People with disabilities prepare all the products,” says Furman.

Unique in the European Union

This convinced the experts from the Educational Research Institute to start a pilot programme, which, to the best of their knowledge, seemed to be unique and had no counterpart in other EU countries.  “After the visit, we already knew that these qualifications made sense. We saw that people with intellectual disabilities can engage in gainful employment based on simple, repetitive activities. That's why we decided to describe these qualifications,” Furman emphasizes. As a result, five new qualifications have been included in the IQS. The first one is officially named: “Pre-processing fruits and vegetables”. Other qualifications also relate to general activities in the food service industry: washing dishes, preparing meat and fish for frying,  cleaning kitchens, packaging meals and delivering them to customers. So they cover the skills needed in a sector that employs hundreds of thousands of people in Poland.

Moreover, before the pandemic, restaurateurs were experiencing a growing shortage of people willing to do this kind of work, and even hiring workers from abroad did not solve the problem. “For people with intellectual disabilities, repetitive activities such as preparing fruits and vegetables to make meals are not a problem. They have a very high tolerance for monotony, but they must work under the guidance of properly trained supervisors,” Furman explains. “The great effort is compensated by the satisfaction they get from working with people without disabilities, the money they earn on their own, and the sense of pride in what they have accomplished. It's a life achievement, and a way of making it meaningful,”  Furman emphasizes.

For people with intellectual disabilities, obtaining a certificate confirming the attainment of a qualification at the level specified in the Polish Qualifications Framework (PQF) provides an opportunity to find employment, and, in addition, can have a therapeutic effect.

Work on the inclusion of further qualifications addressed primarily to people with intellectual disabilities (mainly at levels 1 and 2 of the Polish Qualification Framework) will be part of the next financial perspective, and the process of inclusion of these qualifications in the IQS will be supported by the Educational Research Institute (IBE).