What is unique for the PQF is the introduction, alongside the universal descriptors (first stage), of the second stage descriptors.

First and second stage descriptors constitute a coherent whole. They should be read together to fully understand the uniqueness of each level.

The diagram below shows the structure of the PQF: 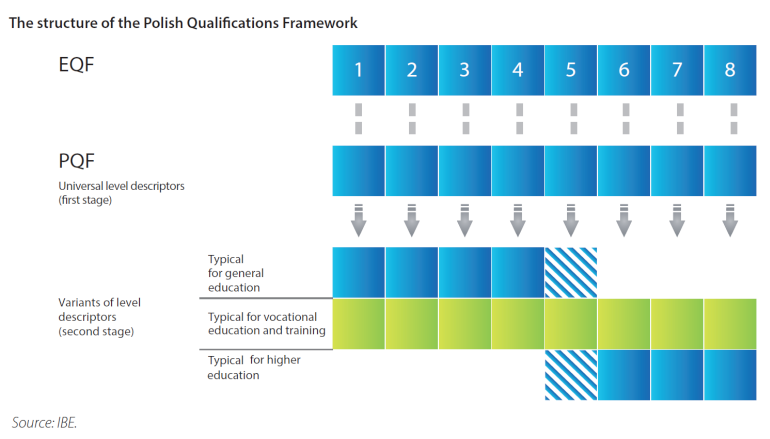 Next to the Polish Qualifications Framework (PQF), sectoral qualifications frameworks (SQF) may be established, which are an area development of descriptors typical for vocational education and training qualifications.

Sectoral qualifications frameworks translate the assumptions of the Integrated Qualification System (IQS) into an industry/sector realities, highlighting their specificity and development directions.

Currently, there are four sectoral frameworks included in the IQS:

Draft sectoral frameworks have been developed for further nine areas:

Development of the following sectoral frameworks is planned:

The main idea adopted when developing sectoral frameworks is that they should be created by respective sectors for the sectors. A wide range of experts representing various aspects of sectoral activity are involved in the development of a framework — representatives of employers, =chambers and industry organisations, representatives of all levels of education system (universities, vocational schools, training companies, etc.) and representatives of regulatory institutions. The project developed in such a group is then broadly consulted among industry, which ultimately verifies its compatibility against the actual needs of the sector. Industry stakeholders are therefore, at the same time, the developers and addressees of the solutions contained in the sector framework.

SQFs offer a number of benefits:

- a clear plan for building and developing a team by sorting out a set of qualifications important from the point of view of sector stakeholders, i.e. sought by employers,
- a uniform and measurable way of assessing the potential of employees - made possible by the ease of comparing qualifications and identifying the needs of the employer,
- reliable verification of the competence of job applicants and, consequently, more effective recruitment,
- open door to cooperation on the European market, thanks to the easy recognisability of qualifications and reliability of the company's human capital competence,
- reliable planning of long-term investments and development routes of the organisation - thanks to the possibility of identifying competency gaps in the market and the real impact on changes in education programmes,
- effective response to deregulation in the industry — an SQF makes it possible to draw up recommendations or standards for the employment of staff members in particular positions within the enterprise, without the need for new regulations.

Sectoral frameworks are included in the IQS by means of a regulation issued by the Minister Coordinator of the IQS. The process of inclusion is initiated by the Minister responsible for the sector concerned, either on his own initiative or at the request of the entity concerned.