﻿Digital badges for children and teenagers 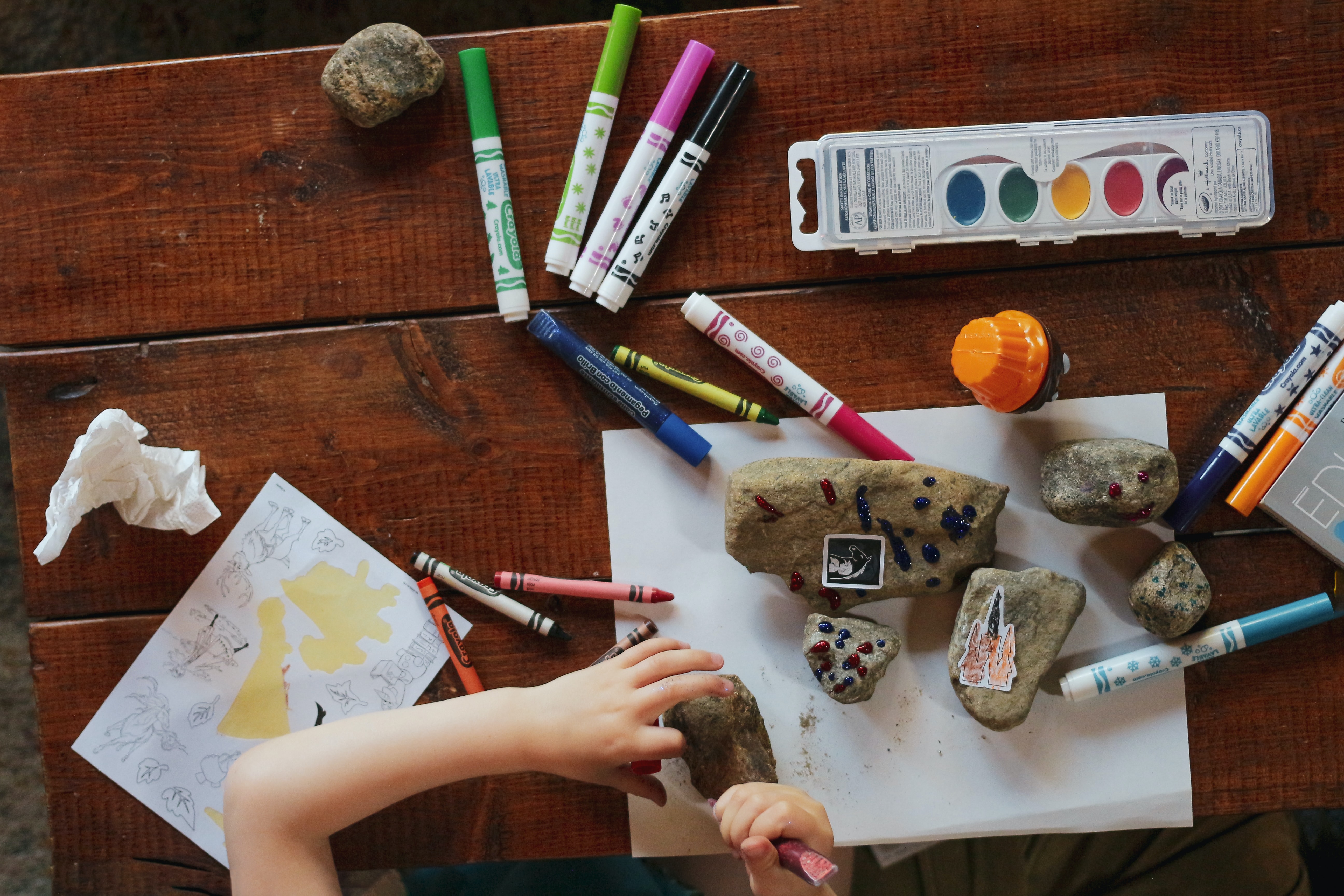 This article presents the work on so-called child and youth qualifications in the form of digital badges. The aim of the efforts is to encourage children and young people to confirm their skills and popularise the Integrated Qualification System (IQS) which is based on the concept of lifelong learning.

The work on the so-called child and youth qualifications in the form of digital badges is part of the project "Supporting the development of the Integrated Qualifications System, in particular at the regional level, by implementing solutions and initiatives aimed at end users of the system – IQS4". In the project, the market qualifications for teachers, which were presented in the previous issue of the IQR Newsletter, are described in parallel.

The idea of child and youth qualifications

The Educational Research Institute (IBE) is the coordinator and provides support in the implementation of the Integrated Qualifications System (IQS). It is worth recalling at this point that this is a system that is particularly valuable for people who want to learn and develop throughout their lives. In the IQS, it is specific learning outcomes that matter, i.e. what we know, what skills and competencies we have and how we can use them in professional and social life1.

In order to encourage children and adolescents to learn throughout their lives, experts at the IBE decided to develop a set of model descriptions of the so-called child and youth qualifications in the form of digital badges, or micro-credentials. Ideally, the model descriptions will become an inspiration for the development of badges by various educational institutions, and thus anyone will be able to earn them through the newly established Badge+ system. It should be noted that this is the first system of this kind in Poland. It enables issuing, step-by-step collection, storage and sharing of digital badges in the Open Badges standard.

For the needs of the implementation of the project, the following definition of the so-called child and youth qualifications in the form of digital badges was developed at the IBE:

As a key action on the way to developing the so-called child and youth qualifications YOU:CREATE A QUALIFICATION competition was held. After the sixteen winners were selected, the following tasks were carried out (described further in the article):

The goal of the competition was to encourage children and young people to confirm their skills and to acquire the so-called qualifications in the form of digital badges on their own. According to the rules of the competition, the task of the young people was to develop a badge proposal, and their work was to be supervised by a mentor/teacher. As many as 156 proposals for child and youth qualifications from 76 schools and educational institutions, including one from a Polish school in Luxembourg, were received within the regulatory timeframe. The chart below shows a summary of the types of educational institutions that submitted applications. 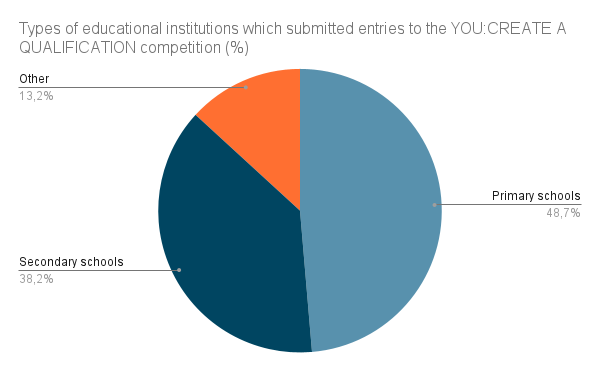 The contents of the competition entries were very diverse. There was a clear prevalence of badge proposals aimed at promoting an empathetic attitude and supporting people in need, such as seniors or peers suffering from emotional disorders or failing to cope with stress (24 submissions), as well as aimed at pro-environment activities and volunteering for animals (20 submissions). Proposals for specialised, even professional badges, such as architect, bartender and diplomat (13 submissions) constituted a fairly large group. A similar group of proposals for badges of a "professional" nature was related to skills in the use of IT programs and computers (8 submissions) and skills in running social media profiles or journalism (6 submissions). It is worth noting that two submissions promoted local culture (in the notional category of "history and local homeland").

91 proposals of the so-called child and youth qualifications in the form of digital badges received a positive formal evaluation, which took into account the completeness of the documentation and meeting the deadline for the receipt of the entry. From this group, the competition committee at the IBE selected 16 winners. The substantive assessment consisted of a number of criteria, taking into account, first and foremost, the accessibility of the badge to potentially interested parties and the ease with which evidence for awarding the badge could be verified by any issuer. The educational institution that became the winner was entitled to the prize of a prepaid card for 2,000 PLN. Students who authored the badge proposal were given the opportunity to participate in a design thinking workshop and meetings to refine the badge description in accordance with the Open Badges standard and the requirements of the Badge+ system.

The work with the winners started with a design thinking workshop for the authors of the winning submissions. The participants had the opportunity to learn and experience the creative problem-solving method. The workshop was also an invitation to look at the ideas submitted to the competition through the eyes of those potentially interested in obtaining the badges. The broadening of perspective mobilised the workshop participants to seek new solutions and think out of the box.

Trainers of the Educational Research Institute (IBE) and, at the same time, facilitators of design thinking who held the workshop (Ewa Frolow and Hanna Biskup) agree that the workshop was an opportunity for young people to act outside the classroom system, a chance to discover creative potential and unexpected personal resources, and an opportunity for team cooperation.

Due to the pandemic and school closures, eight workshops (that's exactly half) were held in an online format. It should be noted that regardless of the formula, the workshop gave students a unique opportunity for integration and cooperation. While discussing the outputs of the workshop, under the heading "my thought at the end," there was nothing but praise, both for the trainers and the formula of the meeting: "I liked it very much, it was creative and interesting", "it was nice to discuss", "interesting classes, they stimulated my creativity and I could take part in such classes more often".

The second stage of work on the winning qualifications in the form of digital badges was prepared and carried out by the experts from the Educational Research Institute (IBE): Urszula Szulc and Rafał Hubczyk. Two online meetings - a total of 4 teaching hours - have been scheduled for each winner (the winning educational institution). The purpose of the meetings, whose participants were mainly the authors together with their teachers/mentors, was to jointly describe each winning qualification in accordance with the international Open Badge standard and the requirements of the Badge+ system. The work on badge descriptions consists primarily in determining what criteria should be a precondition for the acquisition of a badge and what evidence should be presented to the issuer. A summary of the most frequently indicated types of badge awarding criteria is shown in the chart below.

On average, 3-4 different criteria have been defined for each badge, indicating the activity, sustained involvement, possession of knowledge in a given area and readiness to popularise the idea indicated by the badge. Intense discussions on the criteria and evidence for the acquisition of the badge usually filled the first meeting entirely. Then a brief description of the badge was prepared, the tags describing the badge were determined, and the graphical representation as well as the name of the badge were discussed. Thus, all the elements required by the Open Badges standard and the Badge+ system were developed.

The work culminated in a prize-giving ceremony for the winners with the active support of the IQS Regional Leaders. Finally, there was a workshop for teachers on how to use the Badge+ system (conducted by the team of IBE experts headed by Joanna Felczak).

As part of the work on child and youth qualifications in the form of digital badges, the IBE is also planning to pilot validation tools for four badges out of sixteen winning submissions. The pilots will take place in the fourth quarter of 2022 using the capabilities provided by the Badge+ system. As part of the pilot, an IBE-selected institution will be able to prove itself as a badge issuer, and students selected for the pilot will be able to test-drive the badge. For this purpose, it will be necessary to prepare a pilot version (with limited criteria) of the badge described during the meetings with the IBE experts. In addition, regulations will be developed to establish rules for  awarding of badges by a particular Badge Issuer. After the completion of each pilot, summary reports will be prepared, which will include the information on what, if any, changes should be introduced to the criteria and evidence required to earn the badge.

At the beginning of work at the IBE on the so-called child and youth qualifications in the form of digital badges, we wondered if the idea would work and what we would do if it turned out to be a hit.

The sheer number of submissions to the competition (let us recall: nearly 160 badge proposals) testifies to the success of this initiative. In the course of working on the final sixteen submissions selected in the competition, we had the opportunity to talk to both students and teachers/mentors. Everyone appreciated the ability to earn digital badges as well as their collection and storage in the Badge + system.

Ultimately, schools and other educational institutions will be able to register in the Badge+ system as issuers and publish digital badges for children and teenagers, and even for teachers or parents. The sixteen winning badges can serve as a model that any educational institution can adapt to its needs and begin the adventure of issuing digital badges for its charges. Each issuer individually decides what badges it wants to issue and takes responsibility for awarding them. Globally, digital badges, and systems built to support them, are becoming increasingly popular and are replacing traditional diplomas or certificates issued in paper form. In education, the thought of replacing traditional grades with a system of badges that can be earned at various stages of the educational path throughout life is increasingly popular.

At the IBE, further activities are planned for the so-called child and youth qualifications. In Q4 2022, we will refine, with the authors, four additional digital badge proposals that were submitted in the competition. Thus, there will be twenty model descriptions of the so-called child and youth qualifications in the form of badges available to issuers. They will be made public on the IBE's website and, if possible, entered into the Badge+ system so that children and young people all over the country can start earning them.

We hope that in Poland, through the IBE's efforts, systemic solutions will be implemented to support the development and teaching of students with the use of the so-called qualifications in the form of digital badges.

Authors of the article:

Urszula Szulc - key expert at the Educational Research Institute (IBE). For many years, she coordinated financial education projects for children and young people. Since 2013 as a volunteer she has taught classes in schools on finance and cyber security.

Rafał Hubczyk - knowledge expert at the Educational Research Institute (IBE). He has more than 20 years of professional experience related to project management, EU funds, the labour market, training, education, management, as well as business and employee development in a wider sense. He has participated in the implementation of numerous projects and programmes related to skill development.